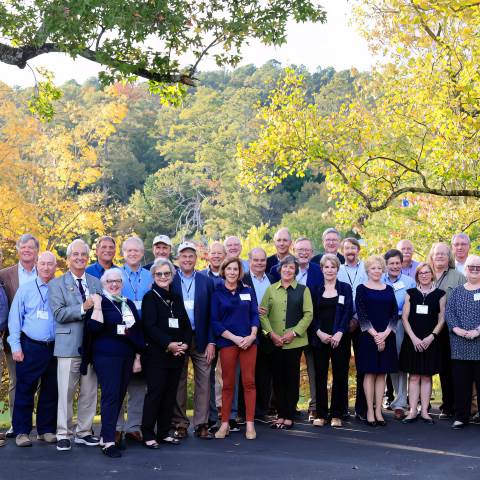 It was 50 years ago, but it seems like just yesterday. That’s the consensus from the members of Darlington and Thornwood’s Classes of 1972 as they approach their 50th reunion this fall.

That’s just one of many stories you’ll hear if you sit down and reminisce with a member of the Class of 1972. The detail with which they recall their beloved days at Darlington and Thornwood is astounding, and this sense of connection has remained strong for five decades.

“I have a picture of the 1971 state championship soccer team behind my desk and when you look at who these men are – they are just dynamic, extraordinary leaders. They’ve led great lives and done great things. Everyone’s a superstar,” said Brock. “There is a deep relationship between us even to this day. We have talked through that final championship game 100 times. We have this camaraderie of kind of reliving an experience together that was extraordinary.”

Deborah (Heyman) Harris (’72, LD ’17) feels similarly about her and her classmates’ shared experience at Thornwood. “Since our graduation from Thornwood, we have stayed in touch with each other,” she said. “Through college, graduate school, careers, marriages, births and deaths, we have made the effort to honor and support our friendships. In our adult lives, we have made time for excursions to the mountains, to beaches, to resorts and to cities. We have walked with each other through the vicissitudes of life. We know the powerful importance of lifelong friendships. This is the gift of a unique journey from youth to experience, built on the foundation of Thornwood.”

As the 1972 alumni started planning for their reunion, they sought to make a gift to the school that would be significant and lasting. The conversation quickly became focused on creating a new endowed scholarship fund that would help make a Darlington education more affordable.

“We liked what the Class of 1953 has done with their lectureship series and wanted to also do something that would perpetuate,” said Hortman. “Our initial goal started as a modest amount, say $150,000, but once Crawford Brock and Gray Tuttle (’72) picked up the ball, the target amount kept rising.”

To date, more than $600,000 has been raised and class members are working hard to reach their new goal of $1 million.

“We have tried to call just about everyone in our class and we’ve had great conversations,” said Brock. “So many classmates have been receptive to participating, and we’ve had the chance to share so many stories and memories.”

The recipients of the scholarships established by the Darlington and Thornwood Classes of 1972 will be known as Lakeside Scholars, and the first – a ninth-grade day student – enrolled this fall. Lakeside Scholars will be encouraged to interact with members of the class, build connections with each other, and become alumni leaders in the spirit of the Class of 1972.

“I hope they learn about our class, take from it these life lessons of giving back, and love the school the way we all do,” said Brock. “I hope that they stay connected for the rest of their lives to this great school. I hope they can go on to be leaders in their classes and help carry that torch just like Steve Winkler and Bill Smith have for us all these years.”

As they get ready to celebrate their 50th reunion in October, members of the Class of 1972 hope their efforts on behalf of Darlington students will inspire other classes.

“I know that there are other classes who could do the same thing we’re doing,” said Brock. “You just have to find class leaders who love the school and hold everyone together with lots of communication. It’s a great opportunity for Darlington and I’d love to see another class match our amount raised.”

The Class of 1972 also commissioned John Taylor (’72) to paint a portrait of late longtime educator George Awsumb, which was dedicated during Alumni Weekend last fall and hangs permanently outside the George W. Awsumb Cinema Room in Zelle Fine Arts Center.