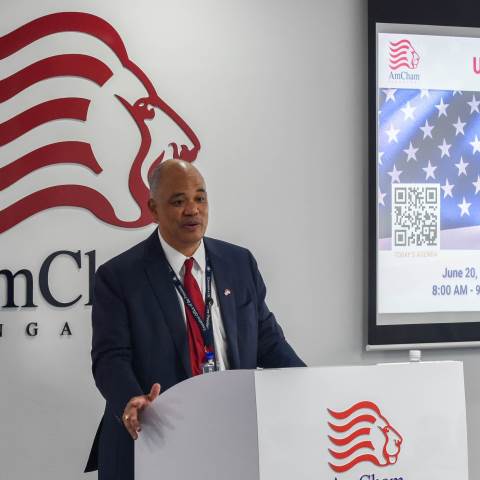 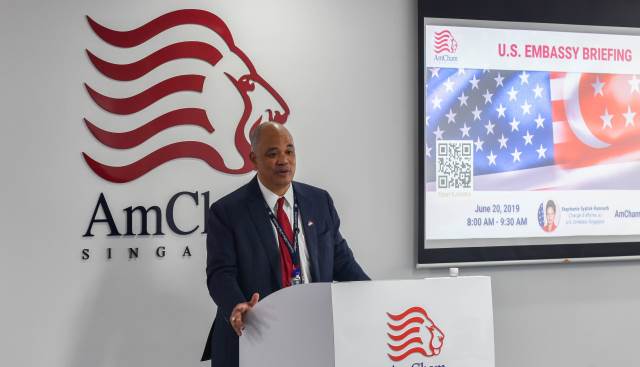 Serving a record four terms of chairman of the Singapore American Chamber of Commerce, Dwight Hutchins (‘82) speaks at a U.S. Embassy briefing.

It was 1973. Nearly 20 years had passed since the Supreme Court ordered schools to desegregate in Brown v. Board of Education, yet public schools in Georgia had been dragging their feet. Rome City Schools finally put together a desegregation plan in 1969, but the lack of urgency led it to be one of 83 Georgia school districts sued by the U.S. Justice Department for failure to desegregate quickly enough.

Dwight Hutchins (‘82) had attended three different schools in one year as local public schools struggled to comply with the order to desegregate. Meanwhile, one year earlier, Darlington had already enrolled its first black students – one of the first private schools in the South to do so – the late Dr. Elson Floyd (’74) in the Upper School and Earl Gibson ('79) in the Middle School. With the addition of a Lower School that year, Hutchins would have the opportunity to enroll at Darlington as a fourth-grader.

“Through incredible luck, I knew key people at Darlington who sponsored my application,” he said. “My mom was the maid for James Formby, then president of National City Bank, and my dad was the handyman for the Barron family, so I often tagged along when they went to work and got to know the families. Darlington was THE school in Rome and the area, and as a poor kid who was integrating the school at a delicate time, I was even more in awe of the place.”

Hutchins fully embraced his Darlington experience, gleaning all he could from every moment. He made friends from all over the world, joined the wrestling team, and explored his passion for science, even working on the school’s first PC with now-retired teacher Rick Buice.

“The curriculum was broad, rich and challenging, starting in elementary school,” said Hutchins. “The options began to open in middle school and then exploded in high school with a range of concentrations and levels that combined with sports, music, and arts that was unheard of back then.

“Even so, the much bigger impact for me was cultural,” he continued. “From the ever-present Honor Code and Motto – Wisdom, Service, Honor – to becoming a nerd, to learning to love and embrace ‘preppiness,’ to becoming comfortable and natural in multicultural environments, Darlington exposed me to experiences that fundamentally shaped my views, values, and identity. I had the opportunity to meet and become friends with all kinds of classmates. Beyond having black and white friends, I had Filipino friends, Jewish friends, and more. I struggled when one of my friends from Iran was unable to return after the Shah was overthrown in Iran. As a ninth-grader, I only knew about Iran from my middle school history class. Now it was real. These experiences, otherwise unimaginable for a kid who grew up in north Rome, more than prepared me to go out into the world.”

And that he did. Hutchins left after his junior year to accept a four-year engineering scholarship to the University of Tennessee, Knoxville. Darlington’s rigorous academics had qualified him for early admission, so he jumped at the chance. He would go on to earn a B.S. in Chemical Engineering from UTK, an M.B.A. in Marketing and Finance from Northwestern University and an M.P.A. from Harvard.

“My first year at UT was unfortunately deceptively easy,” he said. “I had an ‘A’ average in chemistry, attending only four classes all year. Mr. Buice had more than prepared me. Same for calculus after making it through Mr. Paxton. Sophomore year was more of a shock, but I could tap into the academic skills and confidence I developed at Darlington to successfully master the content. It was rinse and repeat when I went to Northwestern and Harvard. The academic preparation and the cultural exposure and comfort I developed at Darlington served me well in those environments.”

Hutchins credits his ever-curious teachers at Darlington for helping to guide his career path by pushing him to examine, explore, learn and problem solve.

“The teachers were amazing, welcoming and always the secret sauce of the school,” he said. “From early on, I loved the projects, papers, and labs, and was always encouraged to go further. This naturally led to engineering. I then got interested in solving business problems, which led to business school and then consulting.”

He started his career as a manufacturing engineer at Procter & Gamble before moving into global consulting with Bain & Co. and then McKinsey & Co. At these firms, he focused on marketing and operational strategies for Fortune 500 companies.

“At McKinsey, I worked on a pro bono project after our generation's George Floyd moment – Rodney King’s treatment after a traffic stop, which was also caught on video and went viral,” said Hutchins. “Led by legendary baseball commissioner and head of the L.A. Olympics Peter Uberroth, efforts were set up to ‘Rebuild L.A.,’ and I was on the team that developed their strategy. After that, I became interested in working on social-economic and public policy problems.”

Hutchins was recruited from Harvard to help set up Accenture public sector advisory services, a practice focused on developing strategies for government agencies and companies working on public-sector issues. He joined, became partner, and then became the global managing partner of the practice, leading teams to help improve the performance of a number of public agencies from tax, to trade, to homeland security.

“A notable project I'm proud of is developing the strategy for and leading the transformation and expansion of the U.S. Department of Education’s student loan program,” he said. “In doing so, the country saved over $68 billion by moving all the student loan processing to Accenture, supporting over $100 billion in loans made each year for over 20 million students to attend college. I also had the opportunity to help develop parts of the White House’s strategy for the Department of Homeland Security after 9/11.”

Most recently, Hutchins has been living in Singapore and serving as Asia Pacific managing director of Accenture's strategy consulting practice for consumer goods. As such, he is responsible for helping the firm’s largest Asia-based clients improve their competitiveness and performance. He also served a record four terms as chairman of the Singapore American Chamber of Commerce, America’s business headquarters in Asia.

“My interest in international trade and economic development led to me to take the assignment as a lead in our consulting practice in Asia,” said Hutchins, who has been with Accenture for more than 25 years. “For nearly a decade, I have had the opportunity to work with American and other multinationals, the U.S. Embassy, and clients like the World Bank on a wide range of topics such as growth, trade, and climate change.”

He and his wife, Maria Paz Castillo-Ruiz, and daughter, Belen, plan to move back to the United States this fall and will live in Boston. But no matter where in the world he is living, he will always consider Rome and Darlington to be home.

“When I travel to Rome to visit family, I visit Darlington because it, too, is family,” said Hutchins, who was recently reelected to the school’s Board of Trustees. “The people there make it so special and important to me. As part of being family, Darlington is home. I probably literally spent more time there than at home or anywhere else.”

This is Hutchins' third time being elected to Darlington's Board of Trustees. He previously served from 2005 to 2007 and again in 2013 before moving to Singapore. He also served on the Board of Visitors from 2003 to 2010 and was named chair.

“I’m looking forward to finding new and more ways to capitalize on Darlington’s strengths and the role it can play to broaden its impact and service,” he said. “I see the power and value of what Darlington can do to change lives, and I want to do my part to make sure that continues to grow.

“I hope today’s students embrace and take advantage of the special place, during their special time, to develop and grow in ways that are unique in the world, and simply unbelievable in a small town like Rome,” he continued. “To live, learn, and work in such a rich and robust environment that was built over a century ago – with students from all over the country and the world – is truly a privilege and advantage that will pass quickly but lasts a lifetime.” 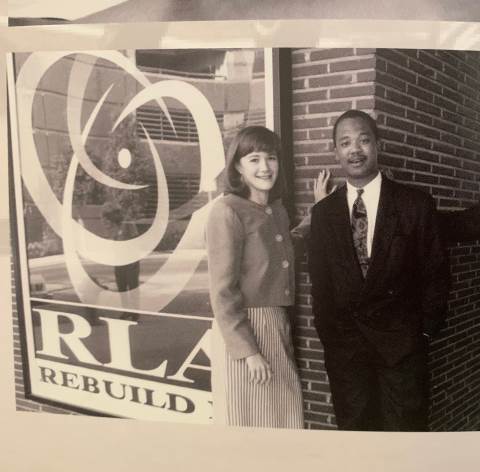 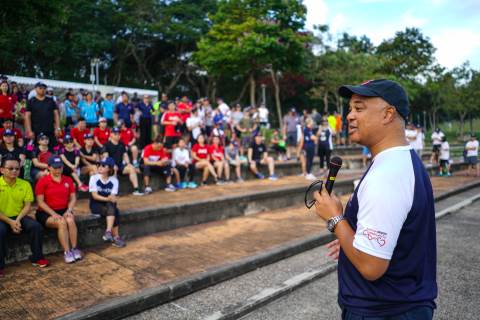 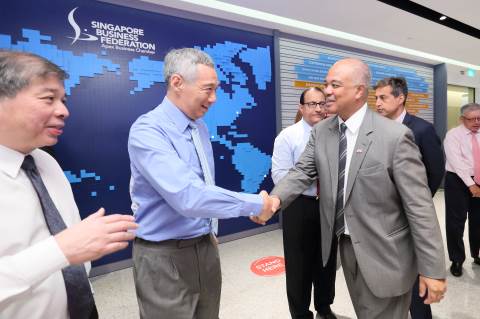