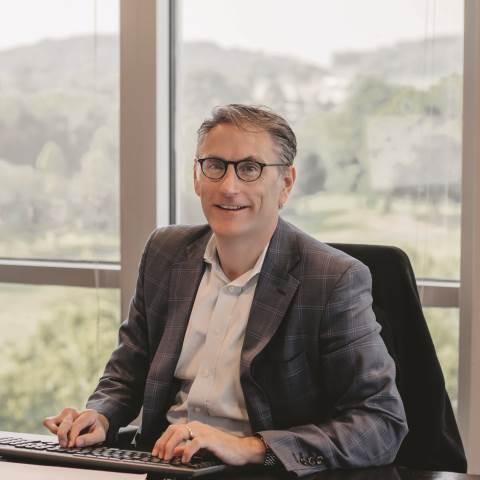 After attending 10 different schools in four countries, Kent Capps (’93, LD ’15) landed at Darlington because of his desire for an American high school experience. What he found here was a forever home.

His father worked for an oil company and the family traveled the globe. When Capps decided to explore boarding school options, his parents were living in Paris, where his father was involved with the construction of Disneyland Paris, formerly Euro Disney Resort. His sister, Kelle (Capps) Maynard (’87), had already graduated from Darlington and, while it was on his list of options, he explored a variety of schools around the country before ultimately deciding to become a Tiger, too.

“I loved how Darlington was a diverse blend of boarding and day students,” he said. “In most boarding schools I looked at in the Northeast, the school community was very separate and there was really no connection to the area. At Darlington, I was in a true community and that was important to me.”

After Darlington, Capps attended the University of Texas at Austin. A terrible car accident his freshman year slowed things down a bit, but he ultimately graduated with his B.B.A. in Accounting and M.P.A. in Accounting simultaneously in 1999.

He headed to New York City and launched his professional career in the Tribeca area, working as an investment banker at Salomon Smith Barney (now CitiGroup). It was there that he stepped into the world of mergers and acquisitions and raising money and capital for companies, primarily in the healthcare arena. His third year there, 9/11 happened.

“I was actually in my apartment just down the street [from the World Trade Center],” he said. “I heard the planes fly over.”

This world-changing event made him change course and, after a year of being a self-proclaimed “ski bum,” Capps moved to Dallas, Texas, where he began consulting with several firms on mergers and acquisitions. There, he attended the University of Chicago Booth School of Business and earned his MBA, splitting career endeavors between Chicago and Dallas.

He has now spent over two decades in finance M&A, corporate development, and investment banking, and is currently the chief financial officer for OMNIA Partners in Nashville, Tenn. The largest and most experienced organization in group purchasing, OMNIA serves the government, education,manufacturing and corporate markets.

Previously, he was a vice president at Provista, a leading group purchasing organization focused on non-acute care. There, he developed and executed Provista’s growth strategy initiatives across all business lines.

“OMNIA Partners was actually spun out of Provista and led to a move for me from Dallas to Nashville,” Capps said. “I actually had an unexpected Darlington connection during the merger process with a private equity firm, TA Associates. This company helped us set up our company as a standalone firm and one of the managing partners there is Morgan Seigler III (’95).”

The move to Nashville meant more than a career move for Capps. After being in a long-distance relationship for several years, he and now-wife Jamie decided it was time to take the next step. The two were married in April of 2017 and welcomed their son, Robert, into the world in June.

Throughout his successful career, Capps has stayed connected toDarlington and the undergraduate and graduate institutions he attended. He has served on theMcCombs School of BusinessAlumni Advisory Board and the Chancellor’s Executive Committee for the University of Texas System, and recently joined Darlington’s Alumni Council. He also attends class reunions whenever possible.

“I was very close and have remained very close to classmates Scott Whitworth (’93), Jim Barr Coleman (’93, LD ’16) and Al Zachry (’93),” he said. “All of them have been a part of my life for the last 20 years and I’ve tried to remain active with Darlington through the years. It’s a community and that community stays with you long after you graduate.”