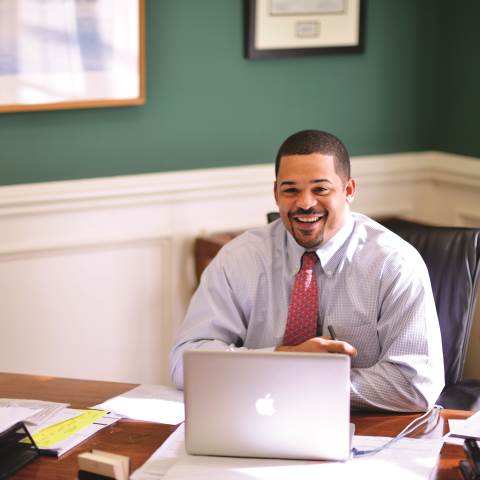 Sean Atkins (’99, LD ’15) learned the value of relationships at a young age. Now director of admissions and financial aid at Suffield Academy in Connecticut, he says the COVID-19 pandemic has emphasized that it is personal connections that make an organization and community resilient.

“I’ve realized just how important our institution is to our families,” Atkins said. “I think sometimes it’s easy to overlook the work that everyone does to make a community whole. COVID-19 has taught me that nothing in a community can be taken for granted. The foundation and importance of community for me all started at Darlington.”

Atkins enrolled as a boarding student his sophomore year thanks to a scholarship from the Boys’ Club of New York. Having grown up in the East Village in Lower Manhattan, he found the South to be a welcome change of pace and the people to be genuine.

“The connection I had immediately with Darlington’s teachers and faculty came at a pivotal time in my life and it was needed,” he said. “Their warmth instilled confidence in me to be a more active learner and helped in my athletic career, too.”

At Darlington, Atkins became a resident assistant in his dorm, served on Student Council and was a three-sport athlete. He played basketball, ran track and was a member of the 1998 Class A Georgia state championship football team.

“Sean came to Darlington as a basketball player from New York City and had never played football before,” said Tommy Atha, head football coach and assistant athletic director. “It was obvious from the start that this young man was tremendously athletic. He had never put on a football helmet before and it took a little getting used to.”

As a junior, Atkins was primarily a backup running back who played some on special teams, but Atha moved him to nose guard the following year.

“Sean was built like anything but a defensive lineman, but he was so quick and strong you couldn't block him,” Atha said. “He totally changed our ability to attack on the defensive side of the ball. By the end of the year, he was being double teamed every play, which essentially gave us a numbers advantage defensively. Sean ended up that year as the Class A Defensive Player of the Year for the entire state. He always played with great intensity and absolutely no fear, and he’s still one of my favorite people in this world!”

While marked with tremendous success in athletics, Atkins’ time at Darlington also brought sadness with the loss of his mother at age 16. The Darlington Community surrounded him during this time of grief, especially retired basketball coach and educator Jim Van Es.

“Coach Van Es was like a father figure to me,” said Atkins. “He was gruff but also gave me warm, tough love. This was exactly what I needed during that time, and I am happy to say that we still stay in touch.”

After Darlington, Atkins attended Bates College in Lewiston, Maine, where he played football and still holds the single game rushing record. In 2003, he graduated with a B.A. in African American Studies.

Life came full circle for Atkins when a position opened up at the Boys’ Club Independent School Placement Program, the very organization that brought him to Darlington. For nearly seven years, he served as director of the program, helping place over 300 young men in independent schools around the country.

When Atkins became a father, his wife, Yasmin, encouraged him to pursue a career in boarding school admissions.

“Living in New York City was expensive, and a career change happened somewhat by mistake,” he said. “I was going to Suffield Academy to see a student that I had placed graduate and happened to find out about an opening there.”

Atkins made the move to Suffield Academy over a decade ago and lives on campus with his wife and their children, Sean Jr., Gavin and Juliet. He also helps out with the boys’ varsity basketball team.

No matter how busy things get in life, Atkins finds time to give back to Darlington as a member of the Alumni Council and a graduate of Leadership Darlington.

“Darlington is the place that shaped me as a person, as an educator, as a father and as a husband,” said Atkins. “In some ways, besides my parents, Darlington is the foundation of who I am, and I will always give back.”