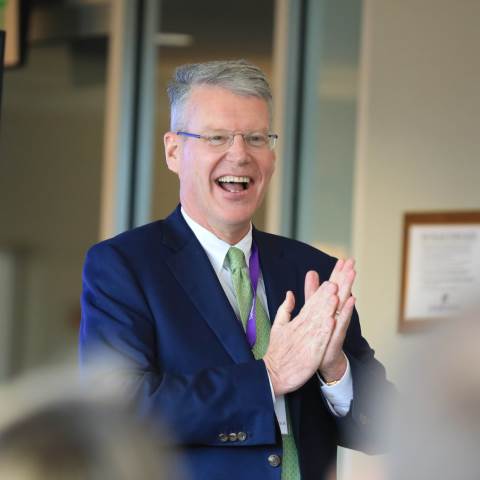 Bill Smith knew the day he visited Darlington’s campus that he was where he needed to be. His friend from summer camp, Tom Barron (’70), toured him and Smith’s connection to the Lakeside was sealed.

“From the first day of school in the fall of 1968, Bill and Darlington just clicked,” recalled classmate Dr. Bob Hortman (’72), chairman of the Board of Trustees. “He was a great citizen of this campus, filling the Coke machines, delivering newspapers to the dorm rooms, all the glamorous jobs. But seriously, Bill was into everything.”

Smith’s fingerprints were truly all over campus as a Darlington student. He served as associate editor of the Jabberwokk and chairman of the Dance Committee; served on the “Y” Cabinet and the staff of The Darlingtonian; and was a member of the Darlington Players, the Pep Club, the Honor Council, and other organizations. He also played baseball, basketball and was captain of the cheerleading squad. He also worked at the Maple Street Community Center, the school’s service project at the time. At graduation, Smith was honored with the Faculty Medal for General Excellence for his service to school and community.

“I always say that you only make a handful of big decisions in life - who you marry, where you live, having children,” said Smith. “Darlington was one of those decisions for me. While there, I learned to read and write at a level I had never experienced before, and this made college easy for me.”

A native of Tallahassee, Fla., with banking in his blood, Smith is chairman, president, and chief executive officer of Capital City Bank Group Inc. and chairman of the board of Capital City Bank, where he has worked since 1978 in numerous capacities. He serves as the third generation of family leadership for the institution, which began over 100 years ago with his great-grandfather, William Henry Smith.

Banking during a global pandemic has been an interesting experience for Smith’s team at Capital City Bank as they adjust business practices while still moving forward. The year 2020 was to be celebratory for the bank, marking its 125th year in operation and making it the oldest of all Tallahassee-based businesses.

“We had a large celebration planned as part of our annual shareholder’s meeting in April and shifted that event from in-person to virtual,” said Smith. “We’ve also commissioned a book of stories about the bank and will soon release that to our teammates and directors.”

Currently a member of the board of directors of Capital City Bank Group, Capital City Bank, First National Bankers Bank, and Southern Co., Smith’s past service has included entities such as the Federal Reserve Bank of Atlanta, Southeast Community Hospital, the Florida Bankers Association, Memorial HealthCare, the Tallahassee Area Chamber of Commerce and others.

A loyal Darlington alumnus, Smith serves the school as a member of the Board of Trustees, a Visitor Emeritus, and a former class agent. He has been the honorary chairman of Leadership Darlington for three years and is also a member of the J.J. Darlington Society and the J. Daniel Hanks Sr. (’27) Heritage Society.

Smith was recognized for his career contributions and devotion to the school last October when he was named Distinguished Alumnus during Alumni Weekend. During his address to the student body and his friends, he emphasized the importance of connections made by the Lakeside. For nearly half a century, the Class of 1972 has been a model example of a class that has valued their lifelong relationships with one another and with the school where it all began.

“Bill has freely given Darlington his time, treasure and especially his heart,” said Hortman. “Bill may tell you that he’s a better man because of Darlington, but I say that Darlington is a better place because of Bill Smith.”

Smith and his wife of 44 years, Paula, have two children, William and Jennifer, and two grandchildren, Ford and Cameron.