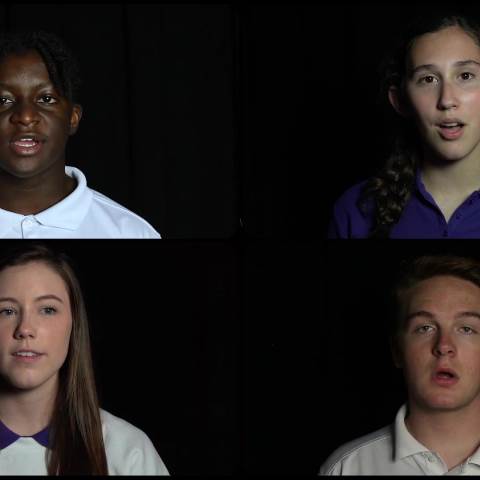 Darlington School: Behind the Scenes of "In the Dark of Midnight"

Behind the Scenes of “In the Dark of Midnight”

It's not every day I get to put together a video presentation of my Concert Choir to show the entire Darlington Community. I have Covid-19 to thank for that. Fortunately, my students were up to the challenge of performing a song during a time where social distancing is the new normal. In this blog, I'd like to highlight some of the process behind getting our video of "In the Dark of Midnight" by Andy Beck produced.

In a normal year, it is the Concert Choir's responsibility to perform at Opening Convocation. Usually, we will have two rehearsals before this performance, since it falls right at the beginning of the year. Fortunately, we were able to have four rehearsals before we had to begin recordings, so we were able to polish the song a bit more than usual.

To record the audio for the piece, I set up four microphones in a cross pattern, with students all pointing inwards towards the center of the cross. Students recorded four at a time, with one person per microphone. This allowed me greater control over the voices when I began to edit the recordings. I had to line up entrances, consonants, and cutoffs so that the choir sounded professional, and make sure that the pitches they were singing were in the center of the pitch, and not sharp (singing too high) or flat (singing too low). Editing a students' recorded pitch is called "autotuning," but that term has taken on a rather negative connotation recently, and I'd like to clarify what it is used for on recordings such as mine. When you pitch correct a choral group, you are taking their notes (which are sung correctly and would sound fine when sung live) and adjust them a tiny bit to make the sound really "pop" on the recording. It would be similar to tuning a slightly out-of-tune piano (but not a very out-of-tune piano!) Pitch correction can be used to correct notes that were sung incorrectly, but the further you have to move the note, the more "robotic" the note sounds. If you correct pitches in this fashion too much, you get a recording that sounds forced and fake, which is not what my program is about.

The process of "mixing," or taking the notes and correcting pitches, entrances, exits, and evening out volume levels, took a majority of my time, about 15 hours in total. Mastering the audio, or adding in final tweaks to EQ levels, putting the sound in an "environment" such as a concert hall (using echo and reverb effects), volume, and stereo effects took another 3-4 hours. All of this work can be done in audio editing software similar to GarageBand (the name of my software is Reason). Once that was finished, I took the audio recording into our next Concert Choir class, which was the day before Convocation. We used that audio recording to record the video portion of the movie.

We had to figure out a way to safely shoot the video where I could have control over the lighting. I chose to use a black background (my choir room curtains) and a simple two-light setup (one foreground, one background). I had two cameras set up in my room, spaced as far apart as possible, with an air purifier running in between them. You can see the setup we used in the pictures attached to this blog post.  We played the audio track and recorded the students singing to the track, two at a time. Once finished, I took all the videos and synced the pre-recorded audio to the video tracks, lined them up with some overlays I had created, and created the video presented at Convocation. This part of the process took about 10 hours total, including rendering time.  The entire video was edited in Adobe Premiere Pro, which every student and teacher has access to (thank you Darlington for the subscription!).

Overall, despite being a bit time-intensive, we had a great time shooting this project. I have received a ton of positive comments about the video, and my students were really happy with the outcome and said they had a lot of fun! We are looking forward to putting out more videos in the future, and cannot wait to see the results!