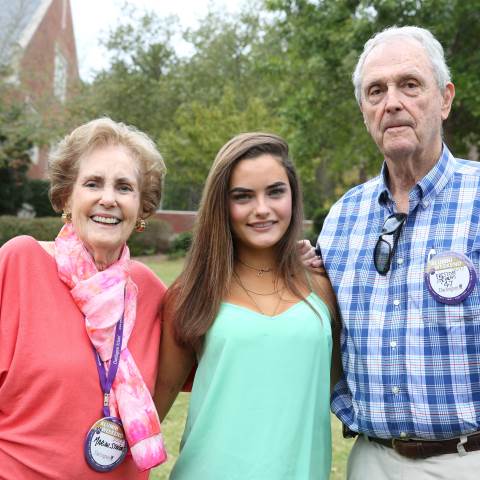 Retired architect Preston Stevens’ (’47) accomplishments are impressive, but designing the new $500 million terminal at what is now Hartsfield-Jackson Atlanta International Airport in the late 1960s remains the crowning achievement of an illustrious career that started with a phone call from his dad at Darlington.

“We had one telephone that was available to students,” recalled Stevens, who was raised in Atlanta and enrolled at Darlington as a sophomore in 1945. “It was mostly used for making calls, and there was always a line. If someone called and you were lucky enough to be found, it was a small miracle. I was lucky enough to be found the day my father called to inform me that his partner at the family firm had passed away. He asked if I would study to be his partner and I liked the idea. From that point, I knew I was going to be an architect.”

In high school, Stevens ran track and was a member of the JV football team, but found his passions writing for the Jabberwokk and excelling in Physics and Geometry. Crediting Darlington, he breezed through college at Georgia Tech and settled into the family firm, Stevens & Wilkinson.

However, before a year could pass, his R.O.T.C. commitment at Tech led to his commission as a Second Lieutenant in the U.S. Army. Reporting for duty at Camp Stewart, Stevens spent a year in the swamps of South Georgia until he was assigned to the Army’s Anti-Aircraft Artillery School at Fort Bliss in El Paso, Texas. There, he received specialty training on a 75-millimeter weapon called the Skysweeper before being stationed in a remote location in Alaska.

“When they asked where we wanted to be stationed, I think we all requested Europe,” said Stevens. “Nobody picked Alaska, but that’s where I ended up, and it was a blessing in disguise. I’ve returned a few times in my life to go fishing, and it is a truly beautiful place to behold.”

After finishing his service at Fort Jackson in South Carolina, he resumed his career, branching out and working firms in Fort Lauderdale and the Bahamas before returning to Stevens & Wilkinson. While assigned to a project in Lynchburg, Va., he met his wife of 61 years, the former Marian Hutter.

In mid-1967, the firm received a letter that would lead to the biggest project in Stevens’ career. The City of Atlanta was seeking bids for a redesign of the Atlanta Airport terminal, an ambitious project would help pave the way for today’s Hartsfield-Jackson Atlanta International Airport to become the busiest in the world in passenger volume.

“We had no choice but to go for it,” said Stevens. “My dear friend, Bill Barnett, gave an old friend at Delta Airlines a call, knowing that they would be influencing the decision. Through that call, he learned that they had just completed an expansion of the airport in Detroit, Mich., with a firm called Smith, Hinchman & Grylls (SH&G) and that they wanted to use them for this project. We knew the City of Atlanta wouldn’t go for an outside firm unless they were associated with a local firm, so I picked up the phone and called SH&G President Bob Hastings to make the ask.”

Hastings said yes and the firms joined forces. They were awarded the job and got to work designing a new, 2.5-million-square-foot terminal that could accommodate up to 55 million passengers per year. Construction began on the midfield terminal in January 1977, and the complex opened in September 1980, on time and under budget.

Now retired, the Stevenses spend the majority of their time at their mountain home near Highlands, N.C. While trips to Rome aren’t frequent, Darlington reunions are never missed, and they enjoy visiting their granddaughter, Augusta Wayt (’20), a boarding student at the school.

But Stevens’ most memorable trip back came at quite an expense. One afternoon, discovered a library book he’d checked out just before graduating from Darlington in 1947. The card was still in the back and, for fun, Marian figured up how much he owed in late fees. He told some old classmates, who called the school, and the group was invited back for a luncheon.

“I got up in front of the student body and faculty and announced I was writing a check for $720 for the late fees I owed,” laughed Stevens. “After the applause died down, one of the math teachers let me know that with compound interest, I actually owed $7,200. That became most expensive luncheon I was ever invited to.”

Stevens’ wit is still razor sharp, but all joking aside his appreciation for Darlington runs deep. Father figures, teachers, and mentors such as E.L. Wright, R.M. “Bull” Yankee, W.J. Judd, Paul J. King and Mike “Sack Brain” Milligan all had a profound impact on the man Stevens became. His peers became business connections, the curriculum prepared him for his higher education, and his instructors set the moral compass that led to success professionally and as a family man.

“I made contacts at Darlington who helped me tremendously in my career,” he said. “Some of the biggest jobs I ever landed were facilitated by my former classmates. Honestly, there were so many it was hard to keep count, and that really speaks to the success Darlington breeds. I had no idea how much my time at Darlington would help me in the future, but looking back it is apparent now.”