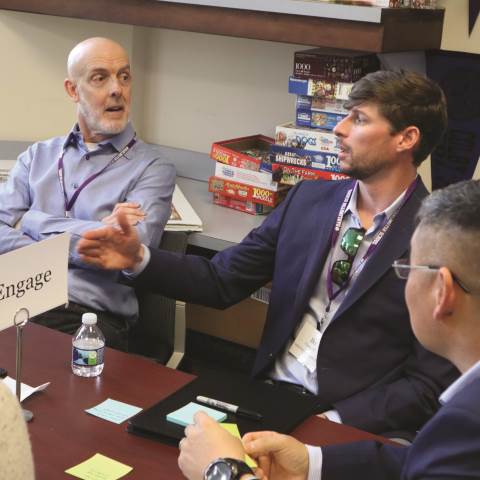 “I was a construction site helper for my uncle’s business and, at first, I just picked up trash and moved material around,” he said. “Then, whenever someone didn’t show up, I would fill in. I started framing houses not long after I started and if you're a framer, you’re also doing the exterior sheathing, insulation, and drywall — everything connected to building a house.”

Cherry learned every skill as he helped out during school breaks and hot Georgia summers.

“It was hot, hard, miserable work,” he said, “and when I was younger, I thought I was putting in that work so that I could get into college, get a ‘real job,’ and never have to do that again.”

Cherry enrolled at Darlington as a boarding student from the small community of Barnesville, Ga.

“The variety of people helped me learn to relate to others in college and now in my career,” Cherry said. “It doesn't really matter what room you put me in; I know how to carry on a conversation with just about anyone.”He then headed to the Universityof Mississippi, where he majored in business administration and management and took on a familiar part-time job.

“Lo and behold, I ended up getting a job with a contractor,” he laughed. He initially considered a law degree, but shifted direction after a pivotal conversation with his boss.

“He told me he had originally gone to school to be an optometrist but his dad had helped him realize the amount of debt he would have by the time he was finished,” Cherry said. “So he decided to focus on his small but profitable construction company and wanted me to consider a similar scenario.”

Cherry gave it some thought and ultimately shifted gears. By that time,he had met his future wife, Kristin, who was originally from Houston, Texas. Her parents had friends who were property developers, and that connection ultimately landed Cherry his first job in Houston as a superintendent.

“I thought I was going to jump into the business and be the next Bob Vila, taking all of these small jobs I had been doing since I was 12 anddoing them on a professional level, ”Cherry said. “But the homebuilding market in Houston was very different, and I was expected to build at a fast pace with the lowest quality. As a superintendent, I wasn’t even supposed to touch anything.”

Cherry found himself frustrated with the quality of work from subcontractors and would spend extra time on the job site fixing the things he wasn’t pleased with. His supervisor discouraged this practice,but Cherry wasn’t comfortable with subpar workmanship.

Two years into his career, he attended an annual meeting for the Greater Houston Builders Association and learned that, based on surveys of new homeowners, he had a 92% approval rating. This
earned him recognition as “Builder of the Year” for his company and also gave him the confidence to breakaway from it.

“I had little to no savings, but I took work that I had been doing on the side and made it full time as BCI Drywall and Finishes,” he said.

His first break into the commercial market came from the original business connection that brought him to Houston, a multi-floor renovation at the Port of Houston Administration Building. After seven years in business, BCI Drywall and Finishes employs nearly 50 and has reached almost $40 million in sales.

“I’ve built my career on the foundation of honesty and trust,” Cherry said. “Having the support of my wife along with the long hours, little sleep, always putting quality first, and nurturing the relationships I made through those early projects helped BCI grow to where it is today.”

The Cherrys, now a family of four with two children, Olivia and Liam, find themselves back in Georgia on occasion to visit friends and family. In 2020, he returned to the Lakeside to participate in Leadership Darlington and, while walking the halls of Wilcox, keyed in on a unique way to give back to the school with the donation of new ceiling tiles.

“I’m pretty sure those were the same ceilings I was looking at when I walked the halls as a student,” he said. “I knew it was a way for me to give back to Darlington, my home for four years.”

The new ceiling system was installed over the summer of 2021.