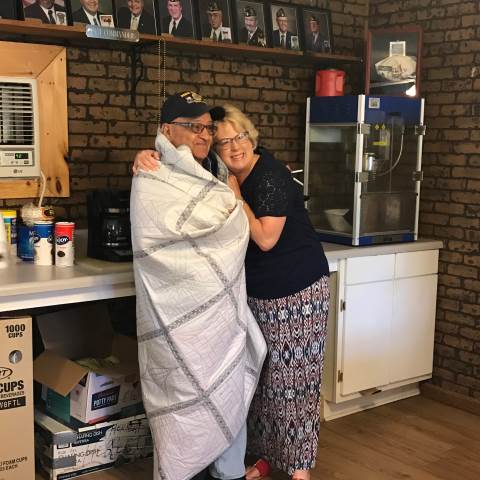 A few years ago, I began thinking about ways to incorporate more hands-on activities into my honors geometry class. The idea of creating a quilt from beginning to end intrigued me. Growing up on the farm, I remember hearing my parents plan a project, going with them to purchase items to complete the project, and then observing the important sequencing that went into developing the project in the most efficient way. Our students do not see this process first-hand as much today and I wanted to set up an activity that would take my students through the entire venture.

Using the concept of illustrating symmetry seemed a natural fit for the quilt development. We took a very simple concept and built on it to generate the quilt.

Students learned more than how to design a square of symmetry for the quilt. They read about the time of the underground railroad when quilts were used as maps to direct slaves to safety. They observed first-hand (under the direction of Ms. Stephanie Bradshaw and her staff at The Stitchery) technologies that are available to manufacture textile goods. Each student had the opportunity to use the machines available at The Stitchery and did a great job!

The two honors geometry classes brainstormed individuals whom they thought would be worthy recipients of our quilt. After much thought and discussion, the students chose to donate their project to a veteran who had no family to do extra things for him.

Penne Baldwin, Regent of the Xavier Chapter of the Daughters of the American Revolution, identified a local veteran of the Korean War who would appreciate the efforts of our students. Hearing Mrs. Baldwin tell the students about the gentleman who would be enjoying the quilt was an emotional experience. She shared with us the overwhelming number of veterans in Floyd County and the stunning number of homeless veterans in the county. The students were thrilled to learn how this project was going to help at least one veteran feel appreciated.

In late May, Penne Baldwin presented the quilt to Abraham Rodriguez.

“Mr. Rodriquez was very touched and said he loved it!” said Penne Baldwin, regent of the Xavier Chapter of the Daughters of the American Revolution. “He wanted me to thank each one involved with the making of such a wonderful gift.

Mr. Rodriguez was born in New York City 87 years ago and at the age of 17 he joined the military. Over his career he was in more than one branch but speaks of his time in the Armythe most. He was a paratrooper and actually parachuted into Korea during the Korean War. During his time in Korea he was shot in the leg and also hit by shrapnel from a grenade thrown his direction. He traveled all over the world and he made a friend in the Army that was from Rome and that town stuck in his head as a place he would settle. For years he was a long distance truck driver, leaving Rome with a load to California, where he would pick up another load to deliver somewhere on the way back. He never married and has one sister still living in New York.

Thoughts from the students:

What was it like to bring your design to life through the process of creating your quilt square?

It was really interesting learning how everything works, step by step. A simple design can make a beautiful quilt! The whole process is really fun. - Alice Lamar

It was actually more interesting than expected. Going from drawing the lines on paper, to transferring them and eventually sewing them. The process was far more simple than expected and we had a lot of help learning. - Luke McDurmon

I’m not a very artistic person, and I’ve never had any sewing experience before, so I struggled quite a bit at first. However, my classmates were super helpful in helping me bring my design to life, and it was satisfying to see what at first was just a drawing developing into a section of a quilt that will help someone in need. - Kyleigh Gunn

What was it like working with your classmates in creating this quilt for someone you’ve never met?

It was great, knowing that our classes could make something for someone else who needed it. Also, some classmates were very helpful when it came to the actual stitching part, so having someone to give you advice was very nice. - Luke Lewis

I really enjoyed making this quilt with my classmates. I feel like it brought us all a lot closer together. During class we are confined to our desk and the few people who sit around us, but in the environment where we made the quilt I was able to interact and receive and give help from people who I don’t usually interact with. And it was really nice knowing that both our classes were coming together in unison to serve our community. - Kyleigh Gunn

Doing anything, no matter how small, always makes you feel like you are making a difference by giving back to your community. Making this quilt with my fellow classmates and giving it to someone I’ve never met brings me so much happiness and joy. I’ve been doing this like this for awhile, mostly through scouting, and every time I m lift with this great feeling that I don’t think will ever lose its magic to me. - Eli Mayes 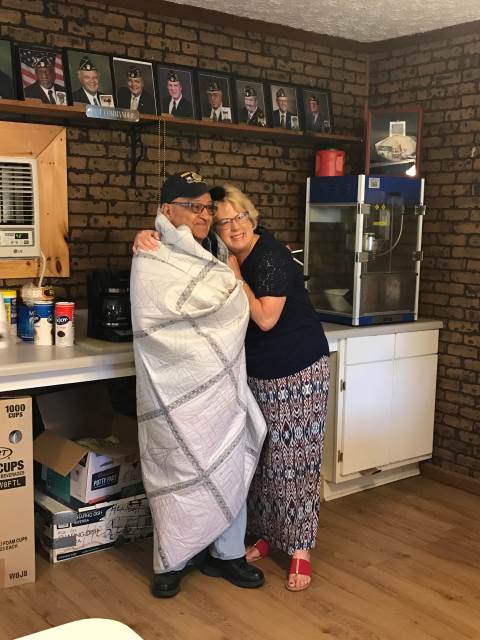 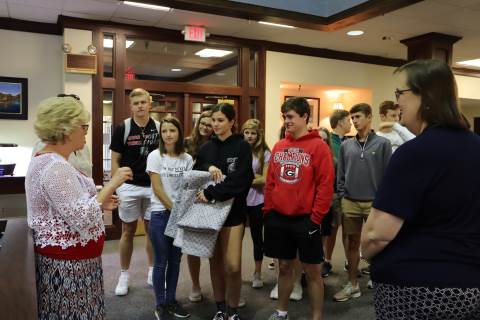 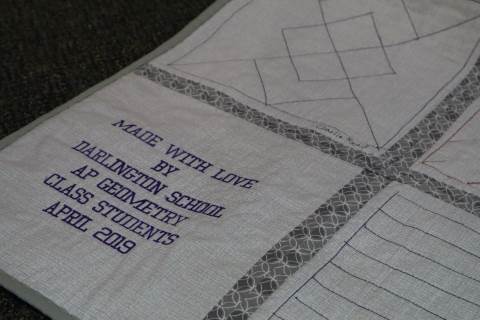 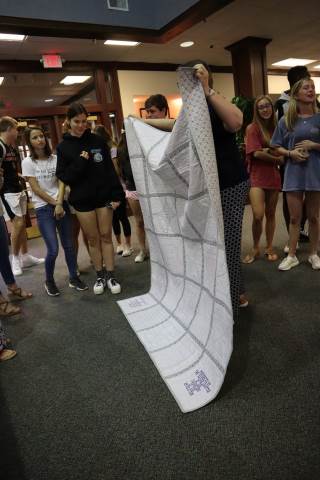 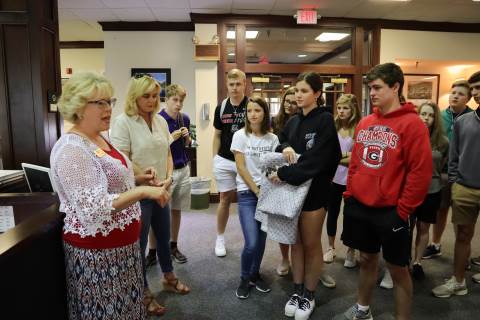 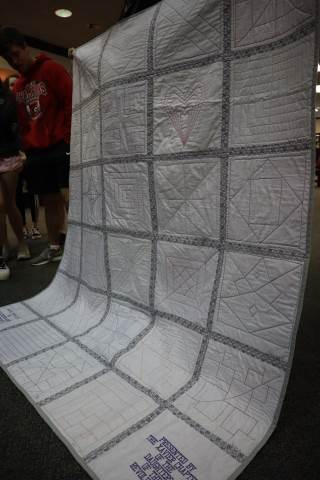 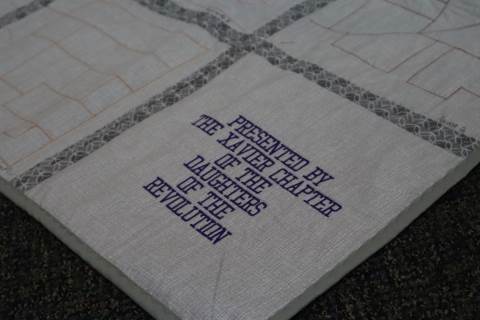 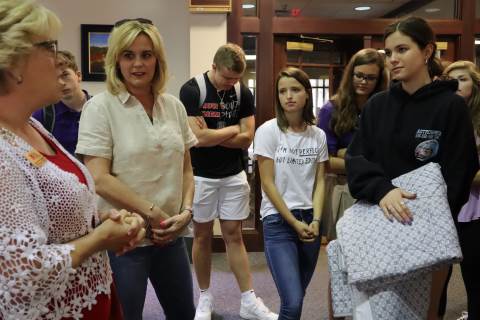 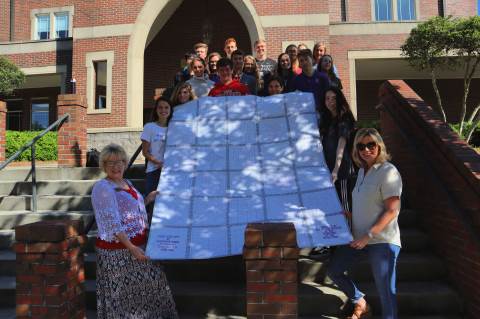 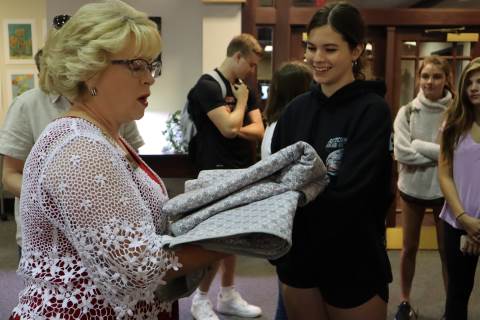 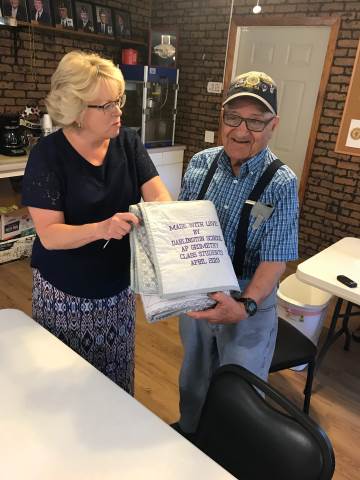